Malaria Disease is a “serious and sometimes fatal disease, caused by a parasite that commonly infects a certain type of mosquito which feeds on humans” (CDC, 2019, para. 1). People with malaria will suffer from high fever, chills, and flu-like illness. There are four kinds of malaria that can infect the human body: Plasmodium falciparum, P. vivax, P. ovale, and P. malaria. According to the CDC, “About 1,700 cases of malaria are diagnosed in the United States each year” (CDC, 2019, para 2). Travelers and in most cases, immigrants returning from parts of the world where malaria can be transmitted, including sub-Saharan Africa and South Asia.

Get Help With Your Nursing Assignment

The World Health Organization estimated that in 2016, 216 million clinical cases of malaria occurred, and 445,000 people died of malaria, most of them children in Africa (CDC, 2019, para 3). Malaria causes illness and even death which decreases the population and the national economies. The poorer the counties the higher infection rate, the cycle of disease is a vicious and will continue to cause deaths. The NIAID “is the leading agency in the United States federal government supporting malaria research and development”(NIAID NIH, 2016, para 1).

The NIAID is also conducting and supporting research to understanding and developing effective alternatives in treating outbreaks of infection. Researching the people that are already known to have malaria clinically apparent.  People that are immune to subsequent malaria infection will be the next step. Having subclinical cases of malaria that went undetected (but the subject may still be immune). Vaccination are they provide in the communities and conferred immunity. Have the vaccination failed to work in the community?

Gathering more information by going out in the community and collecting blood samples. I would perform a study called Cohort Study, a study that is a “group” of people who I would follow over a period, to assess what happens to them, i.e., health outcome.  This will allow me to come up with a hypothesis about what factor that at associated with the risk of getting malaria. 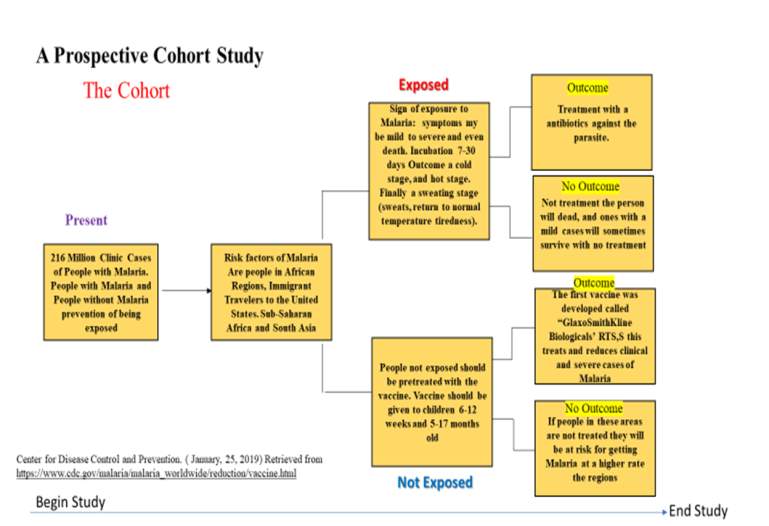 For Example The Cohort Study of Malaria

I suppose the outcome of interest in the development of malaria. I have point out in my chart where and how to treat the exposure to malaria. The need for vaccine research in this area is very important for the population in these countries to be successful and stay healthy. After gathering my information, I can now see that the communities must be vaccinated.

Tuberculosis among people with HIV/AIDS

Public Health Officers are people that “focus on the overall health of communities instead of treating individual patients” (Chron, 2019, para. 1). I’m a health officers for a rural county health department and have been assigned to study the frequency of an infectious disease known as HIV/AIDS.  HIV stands for “human immunodeficiency virus, and it weakens the immune system by destroying important cells that fight disease and infection” (CDC, 2017, para.1). AIDS is stand for “Acquired immunodeficiency syndrome” the most severe phase of HIV infection, it damages the immune system which cause the person to get an increasing number of severe illnesses, called opportunistic illnesses” (CDC, 2017, para.9). According to the CDC “people typically survive about 3 years” (2017, para.9).  Research show that rate of the increase in HIV has been diagnosed rural areas at an alarming rate. A high rate it was report in rural areas there was approximately 1.2 million persons estimated to have HIV. After testing the number that was infected was 898,000 were positive for the disease.

The HIV epidemic is active in major rural areas over the past years it has increased, and is impacting, minorities, older adults. The Center for Disease Control and Prevention (CDC) report that in the early 1990s 5% to 8% of the AIDS cases have been diagnosed among those who live in a non-metropolitan area. The rates in the South living with AIDS is 99.5 per 100,000 in the rural area. In rural areas highly populated by African American, Indian, Latinos, Alaska Natives, and Whites are at a percentage of how that are contracting HIV/AIDS. African American women and men are at 50%, white 38%, Latinos 10%, Indians and Native 2%. In this case I would conduct a case-control study on the disease known as HIV/AIDS to come up with a way to prevent the spread of the disease in the community. A case-control study will be a clear study of two groups of people at the start. In the groups we will study the one with HIV/AIDS and people without HIV/AIDS, to found out the outcome of the disease in both cases. I will determine the exposure rate and the risk factor of the groups. I disgust the disadvantages and the advantages of the studies. The case-control study can move at a faster rate that and is cheaper to perform my study. There was a case-control study done on the risk factors of people with Tuberculosis that have HIV/AIDS. 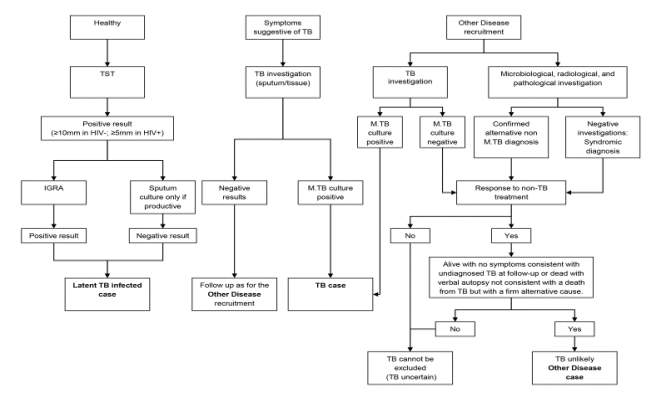 The Tuberculosis (TB) “is a disease caused by bacteria that spread in the air. TB can spread from person to person” (AIDS info, 2019, para. 1). The body can be inactive, active is when you are has TB disease, and inactive is latent TB. HIV is known to weaken the immune system, in people with the you are at a higher risk for get TB. It’s stated that people that have both TB and HIV must be treated for both diseases. The treatment will depend on the individual condition determines when treatment should start.

Our nursing and healthcare experts are ready and waiting to assist with any writing project you may have, from simple essay plans to full nursing dissertations.

TB is known worldwide and one of the leading causes of death among people with HIV.  In the United States there are medicines they are used, and few people will get the disease unless you are from a rural area outside the United States. People with HIV should always get tested for TB.  The Center for Disease Control and Prevention (CDC) stated “without treat for TB can progress from sickness to death” (2016 para. 1).

In conclusion Malaria, HIV/AIDS, Tuberculosis are well-known diseases/ infections that are affecting the community we live in. The cohort study and case-control study cover the information need to make a difference in solving and preventing an outbreak on a rural county. The intervention is priority, avoiding risky behavior in order to prevent the spread of disease. Vaccinations is also important and making the community aware of the options to prevent Malaria is key.