NRS 430 Topic 3 DQ 1
How has nursing practice evolved over time? Discuss the key leaders and historical events that have influenced the advancement of nursing, nursing education, and nursing roles that are now part of the contemporary nursing profession. 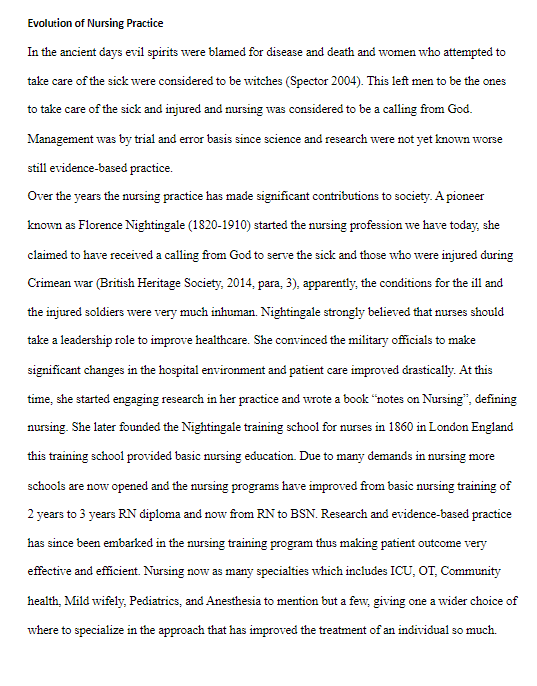 Things change. That’s life. The nursing profession is no exception. Although the primary focus of nursing– taking care of patients– is still the same, almost everything else has been modified. The evolution of nursing doesn’t stop in the present, either. New breakthroughs, medicines and technologies are constantly being made. This means nurses and their employers must keep up or risk becoming obsolete. It has become an industry of adaptation.

The Evolution of Nursing
Nursing in the Past
Nursing, in its most basic form, started out in the home. Before hospitals were built to house the sick, they were taken care of by their family members in their home. Medicine was not yet considered a science.

Nursing as a practice is said to begin between 1840 and 1845. In Great Britain, Florence Nightingale led several women to a group of sick or injured Crimean War soldiers and began to give them supervised care. On the other side of the sea, American doctor Joseph Warrington wrote a book for society nurses and midwives, the first example of a regulated nursing text.

From there, women started receiving training to become nurses in small to mid-size hospital systems. Their education was observation-based and took normally two to three years. When they graduated, the hospital that owns the education center would bring them on as full-time nurses.

As time went on, hospitals grew larger and education became more comprehensive. Nurses of all races and backgrounds were accepted into programs and became part of the workforce. Technology was brought into hospitals in the form of advanced patient beds, stethoscopes and blood pressure devices.

In the 1960s, it became commonplace for hospitals to require nurses to have a specialty instead of being proficient in several different areas.

With the advancement of technology and medicine came the need for more education. A certain certification means some can work in nursing homes, a degree or two grants access to patient care in hospitals, and so on. Nurses learned mostly in the classroom and then implemented what they learned on the job.