Within the following report various different studies will be analysed to assess whether Polycyclic Aromatic Hydrocarbons e.g. Benzo[a]pyrene cause Breast Cancer. PAHs are ubiquitous environmental pollutants formed during the incomplete combustion of organic materials. PAHs contain carcinogenic properties and can exert their effects on humans by ingestion, inhalation and adsorption. Although the exact etiology of breast cancer is unknown, various case-control studies have been carried out that prove a direct correlation between areas with high levels of PAH concentration and the incidence of breast cancer. It’s also been shown that there was a higher level of BaP-DNA adducts in cancer patients than controls suggesting they’ve a role to play in the implication of the disease. It has also been seen that smoking causes human bronchial cells to produce stress-induced unregulated cRNA transcripts. These transcripts can also be seen in breast cancer cell lines, therefore suggesting that smoking can up regulate ncRNAs in breast cancer. Several other rodent in-vitro and in-vivo studies have been done to show how PAHs may implicate breast cancer. However not all are directly relevant to human subjects as humans would not be exposed to such high concentrations of exposure, or exposure at regular intervals. Therefore, further studies must be done to confirm if PAHs directly implicate breast cancer.

Figure 1:This figure shows the structure of common PAHs found in the environment. (Kim et al. 2013)

PAHs are uncharged nonpolar molecules found in coal and tar, but also they’re ubiquitous environmental pollutants and are formed during incomplete combustion of organic materials. (Abdel-Shafy and Mansour 2016)

Many PAHs contain mutagenic toxic and carcinogenic properties. PAH’s were one of the first atmospheric pollutants designated as a suspected carcinogen. Although the health effects  of different PAHs differ, they’re noted to be of great concern due to their highly adverse and extreme health effects on humans. (Abdel-Shafy and Mansour 2016)

Get Help With Your Nursing Assignment

Governmental Bodies such as the European Commission, NIOSH and the US EPA are monitoring conditions, and enforcing legislation around PAHs in air soil and water. For example the European Commission has restricted concentrations of some specific carcinogenic PAHs in consumer products that contact the skin or mouth. A PAH which is of concern that I will be discussing throughout is benzo(a)preyene. (Kim et al. 2013)

Benzo(a)preyene (BaP), with the chemical structure C20H12, is a polycyclic aromatic hydrocarbon which is found ubiquitous in nature, coal and tar. This specific PAH is found in smoked and grilled meats, making it a PAH of particular concern for humans. It is also classified as a group 1 carcinogen by the IARC. (Kim et al. 2013) 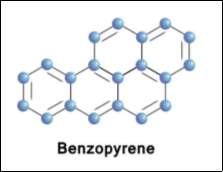 Figure 2: This figure shows the molecular structure of Benzopyrene (BaP) this is the most common PAH and is an ultimate carcinogen.(Lee and Shim 2007)

There is also a lot of studies and research suggesting that Benzo(a)preyene, along with other PAHs has a direct effect on the incidence of Breast Cancer.               PAHs are a severe Endocrine Disrupters (EDs), which therefore can potentially cause negative hormone responses, resulting in Breast Cancer. (Kim et al. 2013)

Within my report I will be discussing:

The exact etiology of Breast Cancer is unknown. There are of course a number of risk factors for the implication of breast cancer such as age, weight, genetics, race, smoking, exposure to radiation and diet.(Kim et al. 2013) Many carcinogens have been identified that are produced as a consequence of industrial activities, and traffic emissions.(Abdel-Shafy and Mansour 2016) And as stated, many carcinogens are speculated to implicate breast cancer such as BaP. As of yet there is no direct evidence to fully prove that PAHs of any kind can breast cancer.

Similarly, in more recent years there was an ecological study carried out in the US in 2015. This study was done to analyse the incidence of breast cancer in relation to ambient PAH emission concentration in varying counties within the US. This study agreed with Morris and Seifters hypothesis, and it was found that highly industrialised areas shared a higher incidence of breast cancer. (Stults and Wei 2018)

Various other cross sectional studies were shown that PAHs may implicate breast cancer in animals such as rodents, however as stated the exact etiology of breast cancer for humans is still unknown. (Korsh et al. 2015)

There are three mechanisms of exposure of PAHs that effect humans. These include; Inhalation, Absorption, and Ingestion. (Baird et al. 2005)

A case control study is a study in which patients with a certain disease/outcome of interest (cases) are compared to patients do not have this disease/outcome of interest (control). These studies are crucial to examine and carry out when deciphering whether a certain chemical can implicate a disease, as it is easy to compare and contrast results. (The Himmelfarb Health Sciences Library, 2011) There has been many different case control studies done on how PAHs may influence breast cancer. However none of the studies have been conclusive, all need further study to be done.

A Cohort study is a study in which a group of samples/patients (cohorts)  which share a common factor (age/race etc), are followed and evaluated with respect to an outcome/disease to discover what exposure characteristics to each cohort may be associated with the outcome/disease. (Himmelfard Health Science library, 2011)

Polycyclic Aromatic Hydrocarbons as stated are Endocrine Disrupting Chemicals (EDCs). An EDC is defined by the US EPA as ‘‘an exogenous agent that interferes with synthesis, secretion, transport, metabolism, binding action, or elimination of natural blood-borne hormones that are present in the body and are responsible for homeostasis, reproduction, and developmental process’. (Diamanti-Kandarakis et al. 2009)

These ultimately can disrupt and alter endocrine processes and cause severe consequences by altering normal mammary tissue development. This has been shown in both rodent and human models. The mechanisms of EDCs such as PAHs are broader than anticipated and extend further than just exerting actions through nuclear hormone receptors. (el-Bayoumy et al. 1995, Diamanti-Kandarakis et al. 2009, Xiong et al. 2001)

Generally speaking, upon exploration of PAHs causing cancer in humans, it has been seen in many studies that tumors develop where PAHs have been administered to the test subject. i.e gastric tumours after oral administration, skin tumours after dermal application. However studies also show that PAHs, benzo(a)prune in particular when administered the oral route (mechanism of exposure being inhalation/ingestion), that tumours are seen in the lungs, bladder and mammary glands. This causes many different epigenetic effects.(Knower et al. 2014)

Epigenetic effects PAHs can have on breast tissue can include:

Upon the exploration of exact AOPs of PAH’s causing Breast Cancer, little information was found. However, what was found is that PAHs are xenobiotics. Xenobiotics metabolism occurs in the liver. Therefore, after ingestion/inhalation/adsorption of PAHs into the body, they bind to the lipid membranes and are transported by lipoproteins in the blood. Here, two main pathways can occur. (Ewa and Danuta 2017)

Phase I – three main pathways of activation can occur: (Ewa and Danuta 2017)

Phase II – following the introduction of a polar group, conjugating enzymes usually add endogenous substituents, such as sugars, sulphates, or amino acids. This therefore increases water solubility, which in turn makes them easy to excrete. Although this process is generally a detoxication sequence, reactive intermediates may sometimes prove to be much more toxic than the original compounds. (Ewa and Danuta 2017)

PAHs carcinogenicity can be influenced by a variety of factors such as synergistic and antagonistic effects of other compounds which are emitted together with PAHs during incomplete combustion. (Barhoumi et al. 2014)

Most notably, a number of both in-vitro and in-vivo studies have shown that dietary supplementation with natural chemoprotective agents such as n-3 polyunsaturated fatty acids enhance anti-tumor action. Within an investigation in 2014, control fatty acids such as oleic acid (OA), linoleic acid (LA)) and docosahexaenoic acid (DHA) were used to test the effects on the uptake and metabolism of BaP in A549 cells. As stated above A549 cells activate BaP through the P450 system to form metabolites which can essentially prove to be carcinogenic. It was seen DHA treated cells showed significantly lower pyrene like metabolites, additionally DHA proved to have a lower abundance of carcinogen BaP 7,8-dihydrodiol and the 3-hydroxybenzo[a]pyrene metabolites compared to other treatments. Therefore proving that DHA supplements could potentially mediate BaP carcinogenic effects. (Barhoumi et al. 2014)

As stated various times within multiple reports and papers, the exact etiology of breast cancer in women is unknown.

There has been direct evidence to prove that PAH administration to rodents in studies can cause mammary gland tumours. However this does not directly relate to humans as the concentration of PAHs given to rodents would not directly correlate with what humans are exposed to.

In conclusion there is sufficient evidence to suggest PAHs cause breast cancer, and more direct studies need to be done.